We go back to the 80's for this one by Anxiety of Silence. A post-punk art rock band featuring David Lamb, from Cattle Mutilators and Manson Family Christmas fame, his art school compatriot Raul Dorn, and my brother Matt on guitar, A.O.S. was known primarily for Raul's on-stage antics (which included Iggy Pop levels of danger and head-worn architecture), elaborate stage sets, and catchy college-radio friendly tunes. The song "love riot" managed to top the local college radio charts, and A.O.S.'s legendary performances at the annual Art Students League fund raisers held in the NMSU art department sculpture graveyard were a sight to behold. Very much a band of the time, some of this stuff sounds pretty dated to my ears, but I was surprised while preparing this post with how many of the songs hold up.

Get Rip It Up 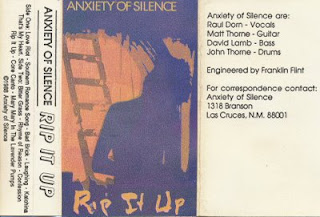 Thanks to Darin for the scan of the original artwork.

As a bonus, I have included some songs from one of the Art Student League Halloween shows. This one is from 1988 and was recorded by a fan on a reel-to-reel 2-track. Most of the tape is unusable due to "wow and flutter" issues, but I pulled the ones that I thought good enough to preserve. On the way to this show, Matt's homemade guitar amp fell out of the van at about 35 MPH. It lasted for most of the set, but you'll hear its final gasp on the end of "I can hear the Monsters." My old roommate Linda Rosul adds some additional vocals on "Caw Crow."

Tracklist:
Caw Crow
I can hear the monsters
Robert
The Thing (part II)
Get it

Great work here. just stopped by to say thanks for the visit.

YES - I'm really digging this AOS album...Now is a good a time as any for 80s music. Thanks for the comment on http://oursoundtracks.com If you yourself have any "mixes" of sorts to contribute - PLEASE contact me again. Also, the site you found me through, The Tweezers, was my father's band-he was on bass. Keep up the great site.

Thanks for the nice comments Mike.

So you're the son of a Tweezer and the son of the AOS singer is in Nancy Site Nine (see my links)...

And yet I don't FEEL old.

You have a really interesting blog site with a lot of interesting music. Your artwork is especially interesting.
I'm not sure how you found our place but thanks for stopping and actually taking the time to leave a comment. We'll put up a link for you on both Voodoo Wagon and FloppyBootStomp. We'll include your flicker photostream also if that's allright.

Thanks Silentway,
It is certainly okay to include the flickr stream.

Thanks for the kind words and the support.

This blog mainly shares music that I have been directly involved in creating over the last 4 decades. If you played on one of these tracks and haven't heard from me...drop me a line in the comments and let me know how you are doing.

From time to time I'll also drop suggestions for other DIY musicians I run across that I think you'd enjoy.