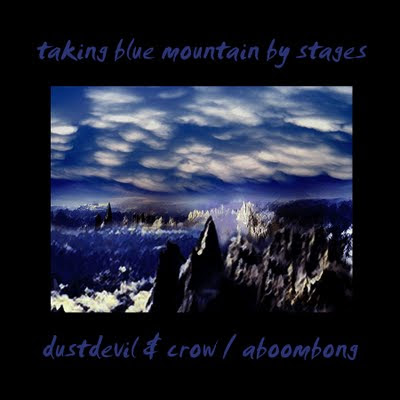 Much of the discourse musicians have with fans is about the creative process. "Where do you get your ideas?" or "How did you get it to sound like that?" Usually, the musician doesn't have much to say on that front or comes off as pretentious and boring. I am hoping to avoid that with this post as I take you through a journey towards a completed song included on the latest dustdevil & crow release, .​.​.​and chuang tzu dreamed that he was me, which is officially coming out September 1st. The song is one that was initiated by aboombong, and developed by the whole crew in stages. The progression provides, to me, a nice view of the collaborative process. In this case, one that could not have occurred in an earlier era as the members of the group are spread out around the globe.

The journey begins with a song from the 2nd dustdevil & crow release, while speaking softly you can hear the insects sing. The song is titled Broken Skin and goes like this:

In the process of creating this track, and before we had the wonderful violin work of rob tarana, I created a drone as a background. We never used it, but I liked the way it sounded. The drone was created from the guitars already included on the track. Here they are by themselves:

Here is the drone that was left on the cutting room floor:

When it came time to do the next dustdevil & crow release, I remembered liking that little drone, and decided to turn it into something. Here is what I sent bendle & michael, a track I called Blue Mountain Drop:

When bendle sent it back to me, he had reworked some lyrics from an old The Door and The Window track called Rain (available on his bandcamp page). The resulting track, now Blue Mountain sounded like this:

Then michael added his trademark wall of guitars and sent us this:

Finally, with the help of nick toombs' additional guitar work, bendle's careful mixing, and mastering work by michael, we get the final song as it appears on the album still titled Blue Mountain. I decided I liked all the various steps towards this final track, so I am releasing an EP that details the journey on my bandcamp page to help promote .​.​.​and chuang tzu dreamed that he was me. You can hear the whole journey here:

The rest of the dustdevil & crow album is really good too and bendle is selling physical copies on his bandcamp page...don't miss out.