Friends of the show: Dirt Communion 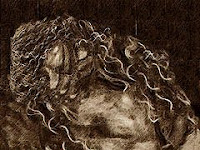 Well, I still haven't worked out the cassette deck situation, so I will take this as a sign and post some friends of the show. Dirt Communion is one of the projects my old roommate Mark (aka. Mister Vague) is currently involved with. If there is any justice in the world, they will be hosting headbangers ball before the year is out. Act now and get a piece of the next big thing.

More from Mark to follow. And a special treat for AOS fans is in the works.
From icastico at 9:03 AM No comments: 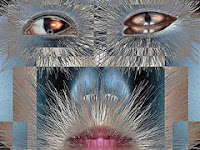 Well, my plan to post the NMSU experimental music tapes from the early 80's fell through as my cassette deck bit the dust this weekend. Luckily, David sent me a little surprise in the meantime that can fill the gap while I work on a replacement. This is a video of the very first A.O.S. show. I had no memory that this video existed. David dates it as 1988, but my memory says it would be summer of 1987 (my memory is often wrong). I'm only sure about a couple of things from the show. 1) It was windy and very, very hot; and 2) I had the worst drum monitor ever and couldn't hear a thing. A.O.S. has quietly moved up the Pen & Mallet charts and Rip It Up is now the most popular album posted here, so maybe some of you will enjoy this blast from the past.

Sound quality is pretty variable, but a few songs sound alright. This is really all about the images. While watching, dig the vintage skaters in the background, the big hair, our low-budget equipment, and the really bad audio/video sync. The first song is 667, one of the band's more popular numbers that we never managed to record (although a cover version by Mr. Vague's old band The Young Pros is floating around, and I may post it if I can get permission).

Update: David (bass) found a newspaper ad for the show. Turns out it was April 25th, 1987. Click for a closer view. I am a little baffled by the "Aussie" theme, I must admit. Opening for the best "Tan-Woman" contest...good time slot to assure somebody shows up. =/;^)